I immigrated to the U.S. with my parents, two highly intelligent and politically aware escapees from a lifetime of fascism, feudalism and poverty.   My sisters and I were raised on a working vegetable and flower farm, which, as the crow flies, or as I prefer, “as the Eagle flies,” less than six miles outside of Harvard Square in “The People’s Republic” of Cambridge, Massachusetts. My childhood was an odd and rather intoxicating mix of the hyper mesmerizing American culture around me and a rich, closed pocket of immigrant culture. A slowly evaporating era and lifestyle conjoined at the hip with the sprawling metropolis and modernity.

My first job, age thirteen, was at a tacky but wildly popular ethnic restaurant a few blocks from Harvard Law School. It was owned by the son of a fellow immigrant who ignored the fact I had no work papers, paid you each night in cash, and drove you back home as we worked well past normal bus route hours. Harvard Square in 1967 was one of the epicenters of the snowballing national debate about Vietnam. We often stuck our necks out the back door to watch bearded protesters with placards. To this day I can’t drive through Harvard or Central Square without thinking of placards and peace signs. It’s still one of the only places in the country where you can see them on a regular basis. It would be another year though before I stuck my own toe into the waves of protests to come. 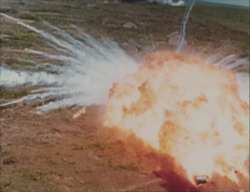 When those protests came in 1968 I wasn’t ready by any means. Honestly, I didn’t know what the fuss was all about actually. My father’s nightly rants about the carnage in Vietnam just didn’t register. There were just too many girls in tight jeans and peasant tops to think about, parties to go to, farm work to do, homework to complete, horses to ride, pot to smoke.

It would be several years before he would explain his blind right eye, why you could not wake him without him jolting upright – screaming and making a grab for you, why the Fascist government hunted men from our village by day, so they slept and did their “work” at night, why his long musical career was supplanted by soldiering and farming, why he would cry suddenly, gushing tears, out of the clear blue; why he could go on, ad nauseam, about how dangerous an unrestrained government could be. Why?

Then it hit me. My older sister came home bawling one afternoon and searched out my father and me in a huge field of trellis tomatoes. We were pounding thick metal stakes into the earth. Her best friend’s brother had just been killed in Vietnam.

They lived up the street from us. I was too awed by his hipness to ever speak a word to him, but he’d been to our house many times to pick up his sister in his black Chevrolet. He’d tasted many of my mother’s special recipes waiting for his sister to pack her things. My mother would never think of allowing anyone to wait in the car. He’d ruffled my hair one time when I was ten or eleven and smiled kindly at me. He’d made polite conversation with my parents who could only respond in halting English. He was dead.

My sister and I waited in line at the funeral home for almost two hours before we were escorted to the closed coffin by a young military man in a dark blue outfit, shiny buttons, and blindingly white hat and gloves. The swanky parlor, replete with velvet drapes, ankle deep powder blue rugs, and antique furniture had been conducting funeral services for old stock Yankees and upper middle class suburbanites for generations. Our town was also a repository for Harvard and MIT professors and had the distinction at one point of being home to more Nobel Prize winners than any other place in the world. Farmers, starting in the early 1700’s, found its proximity to the city and rich soil a blessing. A title search on our farm recently indicated it has been in constant cultivation since 1736 and its original owner helped supply the Revolutionary Army with beef and vegetables. Builders began to savoir it in the late 60’s and today there are but two operating farms left.

Her friend sat in an oversized mahogany chair, tears streaming down her cheeks, her head on her mother’s shoulder, her father looking down at the floor zombie like; none of them aware of our presence. We walked away shaken. It wasn’t the first time I’d seen tears but it was only the second time I had been in the presence of genuine grief. The first was at age ten when my mother opened an air mail letter one day in our kitchen to discover her forty-two year old brother had died tragically. Her friend’s mother let out a groan as we rushed out the side exit. We ran an entire block to avoid cutting through the snakelike formation of waiting mourners. After that I began to understand.

Just a few months later my mother’s childhood friend lost a son to the same war. They had emigrated from the same ocean side island village as us. Her husband abandoned her in a tenement in Chelsea, Massachusetts a month later and she raised her son as best a single working seamstress mother could. I remembered him only because he often drove his mother the ten miles from the city to our farm, dumping her off in the dirt driveway, always rushing off in a hail of engine rumble, dust, and screeching tires when they hit the pavement without acknowledging my parents. His wake was conducted in a stifling one room funeral home on a hot Indian Summer weekend, my mother dutifully by her friend’s side the whole time. His mother never visited with us again. 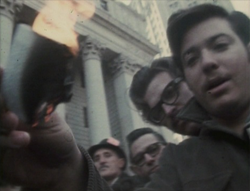 The nightly news, often dominated by combat footage from Vietnam, suddenly meant more to me. My first official protest was in May of 1968. I had arrived at work early to meet up with an older girl who also worked there that I had taken a fancy to. She was all of sixteen and little did I know my chances with her were nil. But, as they say in the military, horny makes you brave, so when she asked me to join her on the Cambridge Common I jumped at the opportunity. All I can remember of it today is a mass of bodies. People shouting angry words, pushing, spittle flying, elbows and legs everywhere, a pungent smell of sweat. I lost sight of her within minutes as she pushed hard through a crowd that was chanting something in unison. In my eagerness to follow I took one of those elbows to the forehead, stunning me momentarily. I remember the word “fuck!” being shouted over my shoulder and squatting to put my head between my knees.

By the time my head was clear the crowd had passed me by and I turned west on Massachusetts Avenue and walked the five blocks to work. The older girl with the jet black hair never came back to work at the restaurant and I never saw her again despite repeated reconnaissance missions.

I have lost count of the number of protests and rallies my friends and I participated in over the next five or six years. By late 1970 farm life had taken its toll on me and my relationship with my father. To my mother’s dismay I moved five miles away to Davis Square in Somerville, a short walk to Harvard Square, a now long in the tooth sixteen year old. That was the year of “18 by ’72” a true grass roots movement aimed at lowering the voting age to eighteen by 1972. At that juncture in history you could be drafted, sent to Vietnam, killed in action, all without the right to vote on whether our country should be there or not. It became the common cause for a group of us at my high school.

Graduating a year early allowed me the opportunity to fine tune my grass roots organizational skills with Mr. Benson (who seriously ill with skin cancer, never saw the fruit of all his work for “18 by ’72”), refine my cooking skills at the tawdry little restaurant near the law school, fight with my father, truly learn to read and write, ride my horses, take post graduate courses, get accepted to college and date any woman who would listen.

Vietnam spearheaded the urgent student activist movement which birthed “18 by ‘72.” The Twenty-Sixth amendment to the U.S. Constitution, setting the voting age at 18, was adopted on July 1, 1971. The protests weren’t violent. Few ever made the news, but protests they were. Sit-ins, sign ups; organized, intentioned, and truly motivating, particularly if you were of draft age, as I was.

I don’t regret a moment of the sneers and antipathy hurled at me, at us, as we made ourselves heard those two years. So much good came of it. The war in Vietnam finally ended despite a recalcitrant administration, by virtue of inertia. Some called it a failure of will on the part of the U.S. and the South Vietnamese. In reality, forcing change at rifle point only lasts so long. Just take a look at China. Chairman Mao would tell you the same thing if he were still alive as he drove by you in his Mercedes on the way to the Macau casinos. But the damage to the malignant, entrenched political machine had been done. For a while.

Ironically, as I write this, it is July 4, 2009, Independence Day, the celebration of the adoption of the Declaration of Independence on this same date 233 years ago in 1776. I can’t help but think; how did all the hard won changes of the 60’s and 70’s get turned around in one generation?

The bigger question is WHY? WHY are we not back on the streets demanding to be heard above the roar of lobbyists and billion dollar backed corporate interests which make laws our Congress and Senate rubber stamp into existence daily?

WHY are we not back on the streets demanding that the excesses of Wall Street, begun in earnest with Reagan’s cutting loose of the Savings and Loans and abetted by Clinton’s deregulation of hedge funds not go unpunished?

WHY are we not in the street protesting the lack of equitable and affordable health care, legislation which has been carefully killed in committee since it was first proposed over one hundred years ago?

WHY are people in other countries willing to die to be heard when all we seem to be capable of is buying into mass consumerism, celebrity worship and maintaining an apathy that borders on self hatred?

I grew up in the Revolution. What happened to it?

at May 10, 2022
Email ThisBlogThis!Share to TwitterShare to FacebookShare to Pinterest