Iran and war are digging up 60s American skeletons. Iran and the recent violent protests there, particularly the very public death of Neda Agha-Soltan, immediately came to mind as I watched the film “DOMINOES” last night. It’s a powerfully moving documentary that chronicles some of the most explosive times in American history; 1965 to 1975. From Watts to Woodstock, to Kent State, to the brutal Democratic Convention, to the fall of Richard Nixon, to Gerald Ford’s pratfall on the steps of Air Force One, and the fall of Saigon.

With Iran and War buzzing in my head, and without a word of narration, “Dominoes” is mesmerizing montage after montage accompanied only by a soundtrack for the ages. Dominoes is as much a brilliant homage to America as it is a caustic metaphor for all that is wrong with it.

It’s incredible to me how much we can keep repressed even with Iran and war constantly in the media . Much of that era was MY time. My youth. My indelibly etched memories. My voice protesting. My body getting shoved by police. “DOMINOES” is still bubbling around in my brain a day later, making me wince, and laugh, and cry. It made me realize I remember those moments almost daily and attempt to bury them at the same time. Why?

Iran news coverage – we’ve all watched and listened the past several weeks as average citizens in Iran risked their lives by flooding into the streets to protest what they feel is massive oppression and corrupt election results. Whether on television, YouTube, other internet video sites, or reading about the now famous “Tweets” from the scene, the bloody death of Neda Agha-Soltan shocked me back to our own tragedy at Kent State on May 4, 1970.

That day, both peaceful protesters and casual observers became sitting ducks for Ohio National Guardsmen. Why they shot will never be truly deciphered, but they opened fire. Not on the crowd in front of them, but at what they believed to be protesters almost one hundred feet away. They shot four people to death, two of them simply for walking to class, one of those an R.O.T.C. member himself, and wounded nine others. 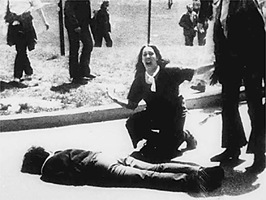 Neda Agha-Soltan, dying on a traffic swollen street in Tehran, blood pouring out of her nose and mouth, onto her neck and chest as bystanders frantically attempt to stem the flow from the bullet wound to her chest, will live for me forever. So will the Pulitzer Prize winning photo of the young woman kneeling and screaming over the dead body of Jeffrey Miller on May 4, 1970 at Kent State.

The shootings at Kent State helped mobilize the nation, effecting a seismic reaction in public opinion. Finally, average people felt vulnerable and violated. Felt the need to take a stand. Americans don’t kill Americans over a difference of political opinion; DO THEY? Suspicions, long held in check, were finally expressed. Not just by long haired, unemployed students and “radicals,” but by fully employed, law abiding Middle America. It appeared people were not going to be lulled any longer.

No, the tide turned here and forever at Kent State. That’s what I truly believed until the election of a B-movie actor to the presidency changed all that for me.

Laced with unforgettable archive footage of Vietnam and world figures, of Americans speaking their minds, protesting in the streets, and the violent response from those elected to serve us, “DOMINOES” also serves up some of the most unforgettable music of the era. 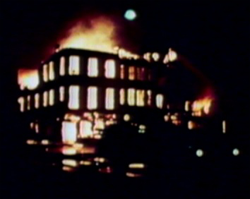 It starts out in the streets of Watts as angry residents burn down sections of L.A. in August of 1965. I distinctly remember my father eating dinner and watching evening news footage on The Huntley-Brinkley Report. He had a rabid appetite for news and liked that I watched the news with him as I often acted as his in-house translator. In his heavily accented English he asked, innocently I might add, “why they burn their own houses down?” I wasn’t equipped to answer that question at age eleven, but my uncle responded in an equally accented voice, “I don’t know, they mad at something, that’s for sure.” I didn’t know that feeling yet, but in just a matter of a few years I would.
at May 10, 2022
Email ThisBlogThis!Share to TwitterShare to FacebookShare to Pinterest